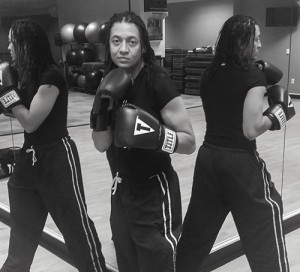 Angel McNamara is the Founder, CEO and Boxing Fitness Consultant of Fight Into Fitness, LLC, a Level One USA Boxing Coach, and a Certified Coach of the “Rock Steady Method” through Rock Steady Boxing, an organization dedicated to the fight against Parkinson’s through non-contact, boxing inspired fitness training.

Angel began Fight Into Fitness in 2008 to share the “sweet science” of boxing with the wonderful world of fitness through building physical strength, stamina, boosting confidence, and gaining mental focus.

In 1999, out of curiosity, she walked into the Baltimore Boxing Club where she met and trained with Jake “The Snake” Smith, Jim Sauffley, and Nick from Thailand. After three months of a rigorous daily training regimen with them, she was offered the opportunity to fight as an amateur. Throughout her career, she has had the pleasure of training with some of the best boxing and Mixed Martial Arts coaches in the industry, such as Barry Hunter, Robert Crawford, Boyer Chew, and Na’eem. In 2009, she retired with a 17-5 amateur record and a 6-5-1 professional career record.

Angel was born and raised on the Eastern Shore in Cambridge, MD, where she spent most of her life in athletic competitions: basketball, softball, field hockey, soccer, and football. Aside from her passion for boxing and fitness training, she enjoys traveling, walking her dog, softball, kickball, skating, watching movies and admiring the many wonders of the great outdoors.

Find Us On Social

Help us fight back against Parkinson's! Read more...